We are finally in a new state, New Mexico, known as the Land of Enchantment! It feels good to be out of the land of rain and thunderstorms. We do plan to go back to Texas one day to go to Big Bend National Park, but we both agreed we can wait awhile to do that. Texas gave us a quite a scare. 🙂

The campground in Las Cruces is just forty-five miles north of El Paso. Our plan was to check out White Sands National Moment (WSNM), which is in a portion of the Chihuahuan Desert. We got to the campground early in the day and found out that White Sands was having a sunset guided tour. We thought why not go? So we did!

Near the campground, the land was flat, brown, desert like. After a thirty minute drive the landscape changed to big, tall, mountains then, it got flat again and we could see why the park is called White Sand. There were hills of grassy sand. We were surprised to see that we were in a missile range test area. The military has scheduled days to test missiles so the road to WSNM is closed then. Lucky, that didn’t happen to us. (By the way, we got stopped again at another border control area right before we got to White Sands).

There is only one road through the park (which one can bike) and it was covered with a light dusting of sand so light in color you would think it was all snow. The sunset walk was a quick, one-mile guided walk through a portion of White Sands. The moon was high and the pink and purple colors in the sky against the very white sand and San Andres mountains was so pretty. We wanted to stay till dark to see the stars, but it was a very hazy day and barely any stars were out. We were told that it was hazy and smoggy because of dust storms.

Fun Facts we learned on the tour:
• It isn’t sand at White Sands NM. It’s actually gypsum!
• What??!! Yep. Gypsum. It’s a common mineral but is not seen above the surface often. It’s such a fine grain that it looks and feels like sand.
• Since gypsum is so rare, in the early 1900s people wanted to use it for profit. Thank goodness that didn’t happen as White Sands became a National Monument in 1933.
• The dunes are constantly moving and being reformed by the wind.
• All that “sand” stays in that small area and is not blown away because of the water basin that is underneath the ground. The water makes the gypsum kind of stick so it will not blow away.
• The park offers two hiking trails and camping. One can also sled down the dunes.
• The plants and animals that live at White Sands have learned to adapt. Most animals and reptiles stay hidden during the day and only are seen at night.
• Only one other gypsum monument like this exists and it’s in Mexico. Sadly, it is being destroyed and used for profit. 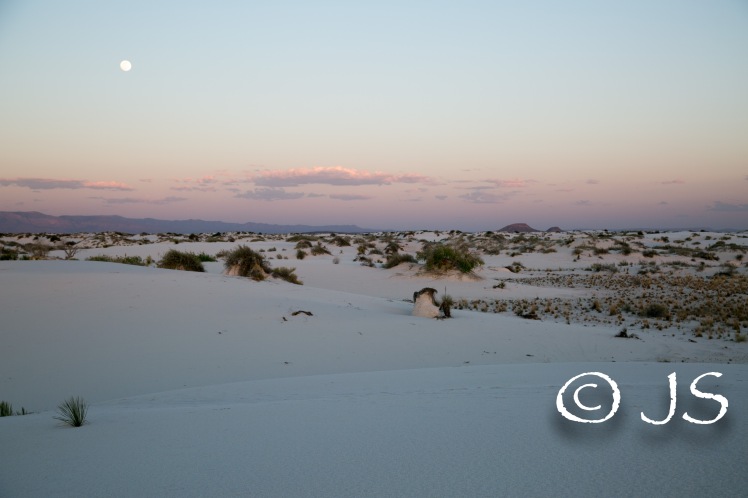 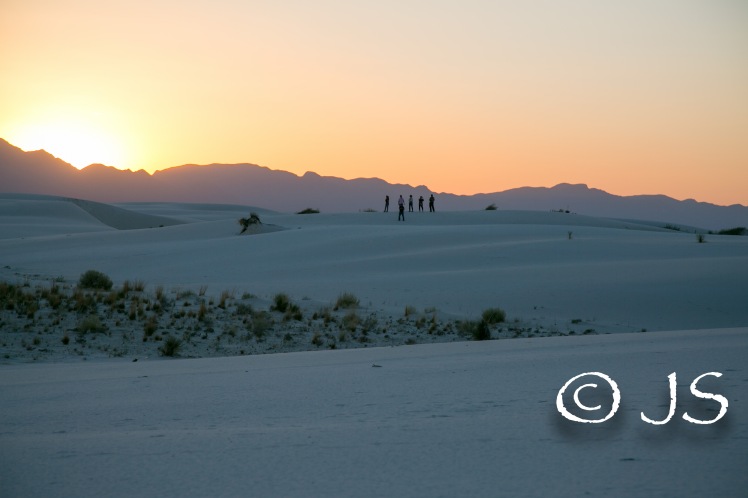 The next day we got up early to go on a hike at White Sands. We were told to get there early because the temperature gets high quickly and it is warmer there than outside the park. We got to the park at 8:00 but it wasn’t early enough. It was already eighty degrees and the rangers do not recommend going on a hike when it’s eighty-five or above due to the sand being so hot and no shade on the trails. There are two trails at the park. One is two miles and the other five miles. We planned to go on the longer hike but with the high temperature we opted for the shorter one.

The trail first took us up a large dune we were could see the mountain range in the background. Once we descended, we were surround by tall dunes, no shade, and the hot sun. Even with sunglasses on, the sand was bright. If we took our sunglasses off, we had to close our eyes. The reflection from the sand was too bright. The trail took us over multiple steep dunes and loose sand. We used the many footprints to get up a dune as the loose sand made it hard to move up. We walked along the rim and then the trail went back down again and repeated—up the dune, along the rim, and back down again . . . and repeat. By the time we were done with the hike, we were glad to have done the shorter hike. 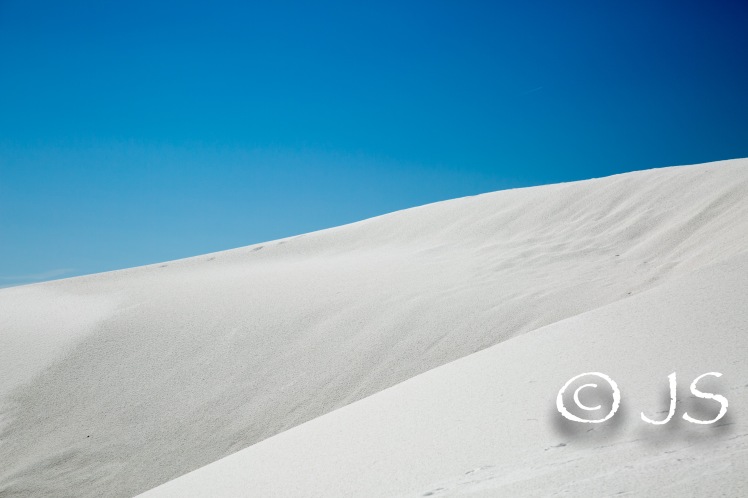 It was such a neat experience being on the trail with not many people, being in the open sand, and bright blue sky. It was so quiet and peaceful. Brad and I would just stand there and take in the scenery. What we were doing at that moment was exactly what this trip was all about—exploring a new area. Doing something we have never done before. Seeing something we have never seen before. Just being outside, enjoying the world around us. 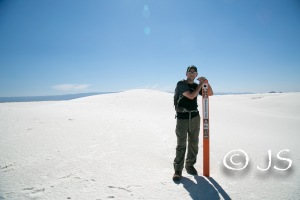 After the hike, we went over to New Mexico State University and walked the campus. Yes, we go to a lot of college campuses and check them out. Mostly because Brad is big into college sports and enjoys seeing what other campuses are like.
We are off to Arizona . . . in the middle of summer. Oh boy. It’s going to be hot!
Till then!