Brad and I don’t usually like the super popular tourist attractions when visiting a a new place. Not that we haven’t been to popular areas, like hiking Angel’s Landing at Zion or seeing the sunrise at Mesa Arch at Canyonlands but we rather see the less traveled areas as those areas are not only less crowded but are normally beautiful hidden gems.

That being said, when we decided to go on the most popular hike in Grand Teton, we knew we had to be there early and to have lots of patience. Jenny Lake is a big focal point in Grand Teton and is the most visited area within the park. In fact, this area is so busy a 5 year multimillion dollar renovation project was just competed last year as the trail was deteriorated due to all the tourist. 5 new buildings were made, a larger boat ramp was installed, rest areas were made so tourist can relax and enjoy the views and trail reconstruction was done, just to name a few of the completed work to improve the area.

The hike to do at Jenny Lake is Hidden Falls and Inspiration Point and there are multiple ways to get there: hiking in from String Lake or from the Jenny Lake visitor center or taking a scenic boat ride. The hike follows the lakeshore of Jenny Lake adding many miles and viewpoints while the shuttle is a quick ride that offers views of Nez Perce Peak, Teewinot Mountain and Cascade Canyon.

Once across the lake, one meets up with many hiking trails, one of those trails leads to the classic hike to Hidden Falls and Inspiration Point. From the boat launch, it’s a quick hike to the two attractions. We choose to go to Hidden Falls first since the viewing area is small and was already getting crowded by the time we got there. The falls itself is pretty awesome-200 feet of rushing water framed by evergreens. This is the only waterfall in the park that is easily accessible making it the most popular waterfall in the area.

After the falls we headed up to Inspiration Point, a short and not too difficult of a hike that offers views of Jenny Lake and Gros Ventre at the summit. If one choices, the trail continues on to Cascade Canyon, which connects to other trails within the park.

There is another hike by Jenny Lake that isn’t as crowded and is home to moose, appropriately named Moose Ponds. The day we went we didn’t see any moose but we saw nice views of Teewinot Mountain and the beginning of the fall colors.

On the opposite side of a busy hike, one weekend we decided we needed to go to a less popular area and decided on Jade Lakes. It’s an hours drive southeast from Grand Teton and the scenery is completely different from what we are used too. Beetles have infected the trees in this area leaving dead trees as far as the eye can see. Mountains were replaced with ridged stone cliffs and rolling green hills. Closer to the trailhead, the famous and extravagant Brooks Lake Lodge is now closed due to a kitchen fire from a couple of months ago. At $600 per person per night, it’s one of the most exclusive lodges in the area.

This area is close to Dubois and is about 2,000 feet higher elevation then what we are used too. The hike to Jade Lakes starts off by the pretty Brooks Lake and quickly gains elevation. It’s a short hike up and from there the hike goes down to the two lakes. The lakes are clear and have a blue/green color to them and we were able to relax and enjoy the quiet as we were the only two on the trail. The hike follows part of the Continental Divide and goes through the forest and across a few creeks before it loops back to Brooks Lake. 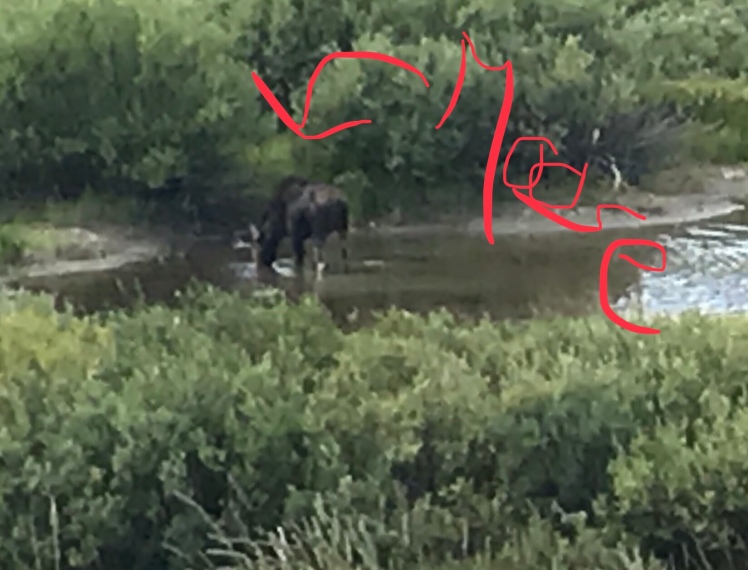 On the way back from the hike, driving down the highway on Togwotee Pass we were hoping to see the famous grizzly Mom bear and her cub, who were just recently reunited (https://www.google.com/amp/s/buckrail.com/grizzly-bear-family-reunited-on-togwotee-pass/amp/). Instead, we saw a moose just hanging out in a pond by the road. We were total tourist as we just stopped and watched the moose for a bit, just eating and paying no attention to us. That was the second moose we saw this season.

Speaking of moose, the first moose we saw this year was at Rendezvous Park, just outside of Teton Village. We had just finished up a half day at Teton Village, an area that has restaurants, shopping, and is known for an Aerial tram ride that will take you up 4,139 vertical feet in less then 15 minutes. Once at the top, there is Corbet’s Cabin, known for their famous waffles and 360 pano views of Jackson, the surrounding mountains and the Tetons. We had an adventure pass so we also went on the gondola and mountain biking, where we met up with our neighbors and other co-workers. Brad enjoyed mountain biking but me not so much. We had so much protective equipment on it was very humorous and I think it took longer to get all the equipment on then we were out there ridding. We both would defiantly recommend getting the adventure pass if you happen to be in Jackson, we tried new things and saw some pretty great views of the area.

Our time in the Tetons is ending quickly as we only have a couple of weeks left. The weather is changing to cold rain and the mountains have experienced some storms so they are lightly covered in snow. Happy Trails everyone!