Agh, we almost catch up with the blog to fall behind. So sorry fans! This is the last post about the Grand Tetons (we left there in September, yikes!) so here is goes….. 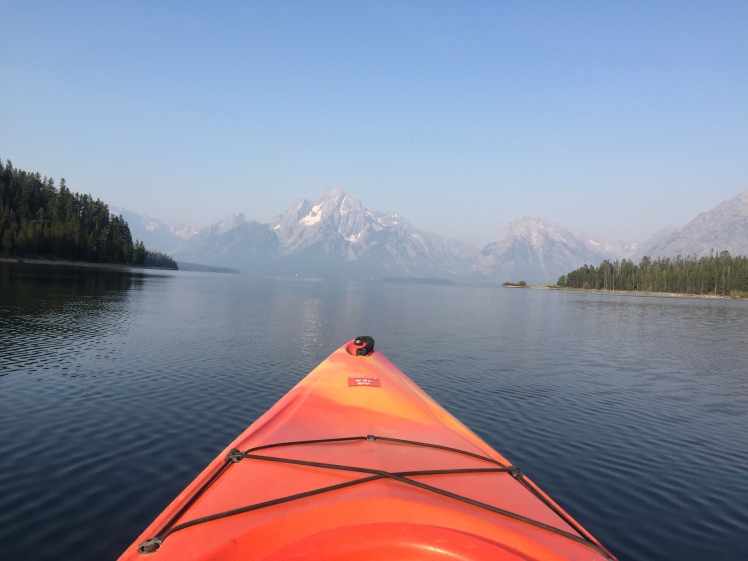 We had so many great experiences at Grand Teton and most were a first for us. This was our first time work camping and we couldn’t have picked a better place. Breathtaking views, great co-workers, and memorable and fun adventures. Me (Jen) went tandem kayaking for the first time, cruising around Jackson Lake early in the morning. I don’t think there could have been a better place to kayak; the water was calm like smooth glass with the towering mountains ahead of us. The temperature was a little cool but perfect for kayaking and boy, was this a great arm workout! It was so peaceful and quiet on the lake as it was just the two of us enjoying the moment, taking in the relaxing surroundings. Another item to add to the want list-a kayak! Later on, we went on a dinner boat cruise on Jackson Lake one rainy afternoon with friends and ate dinner on a small island. We grabbed the first picnic table so we had a clear view of the mountains in front of us while being in good company, having a delicious dinner. Not bad for just another Sunday at the Tetons.

Whitewater rafting was another first for us. The best part was it was free since we worked at Grand Teton. We went with our friends, drove to Jackson Hole, each putting on a wet suit, and it wasn’t until we were on the bus to get to the river that I thought-wow, I’m really doing this and I’m pretty nervous. The instructors did a great job explaining the rules, we all wore life jackets and off we went on a 8 mile ride of the Snake River. We were with another couple and the wife and I decided that since the front two seats get the most wet, our husbands should sit up front. And they did. What good sports! The first rapid was a bit scary because we didn’t know what to expect but after that first one we were good to go! We powered through multiple rapids, ranking from a ii-iii, with the Big Kahuna and Lunchbox being the biggest waves. Would we go again? Yes!! Would we bring a change of shoes on the bus so our feet weren’t frozen ice cubes afterward? Yes again!!

The next biggest first (and I think maybe the number one or two thing we did) was to see wolves. Yes, you read that right. Actually wolves. My co-worker was kind enough to take the two of us after he and his wife had been there as a work trip for her. It was a quick drive and a 10 ish minute hike up a hill to get where we could see the wolves.

We were about a mile away from the wolves, had powerful binoculars and a spotting scope. It was our lucky day because the wolves were feasting on a fresh kill so we saw them the WHOLE time-we were watching them for a bit more than an hour. It was so incredible to see these beautiful wild animals in their natural environment. We saw them play by jumping on each other, saw them lay down and chill, saw them eat, and even stand apart from the pack to look at us-ok, we don’t actually know if they saw us but it sure felt like it! It was a once in a lifetime experience and we are so grateful! Brad and I took friends a few days later and we didn’t see the wolves and when my co-worker went prior to taking us they only saw the wolves for a couple of minutes while being there for over an hour. Truly an amazing experience.

The other firsts were seeing other animals in their natural environment: seeing a fox run around with a mouse in his mouth (foxes are my new favorite animal), a large bull moose eating leaves while on our way to a hike early one morning,

and a mama black bear with her two cubs running around like they own the park (which of course they do).

We went to all the tourist places like Moran Row, Oxbow Bend, Schwabachers Landing, and Snake River Overlook, where Ansel Adams took one of his famous photographs. Towards the last couple of weeks of our stay there (September), we got up early a bunch to see the sunrise (and it was cold-in the 20’s!!) and in the evening drove around to find wildlife and watch the sunset. I even tried Milky Way photography for the first time and boy was it chilly out (and much more difficult then I thought it would be!)

We don’t think we have ever done so much in such a short amount of time, between the hiking, wildlife, and other adventures, it was brilliant. Our time in Grand Teton was spectacular and life changing.

We are now in Arizona, right outside of Phoenix for the rest of the fall/winter. Still in shock that it’s now 2019, where did 2018 go? Hope everyone is having safe, healthy, and adventurous New Year!

2 thoughts on “Many Firsts”