We had been in Utah for 4 month before we drove to Grand Teton so we thought we would be ok with the elevation gain going to Wyoming but we were wrong. The 2,300 feet gain from Utah to Wyoming impacted us for the first few weeks-we were tired all the time, got short of breath easily, and didn’t have as much energy. Sometimes talking in long sentences we had to pause and take a breath before continuing on! Hiking, running, or walking up a hill left us breathless and to be honest, it was annoying because we knew we were in better shape than how we felt. We were told by other to increase our water intake, carb and salt intake, and no drinking for the first few weeks until our bodies adjusted and believe us, we were craving more water, carbs, and salt so that was an easy adjustment to our diet.

It was smoky looking outside for most of our time in Grand Teton due to all the wildfires, especially the one in California. Some mornings were clear where we could see the mountains and the next day the mountains would be covered in smog, making them nonexistent. We were told that this year was the smokiness it’s been in a while and that the smokiness lasted much longer than normal.

Even with the wildfires, we kept busy. We were only going to be at Grand Teton for two months so we had to take advantage of being in such a beautiful area. We hiked Bradley Lake and Taggert Lake, which was an easy 5-mile loop and the next weekend hiked Bearpaw, a 10-mile flat trail that leads to 4 different lakes. A close trail to us that we hiked was Heron Pond and Swan Lake, an easy 3-mile loop trail. We were told by other hikers that there were a Mom black bear and three cubs on the trail but we didn’t see them.

The two big hikes we did were Delta Lake and Union Falls. Delta Lake is a non-designated trial at the park, it is not marked on any trail map nor on the trail, and if you ask a Park Ranger about the trail they will try hard to steer you away from the hike. Why is that? Because they had to call search and rescue 5 times this season for people who got lost or injured on the hike.

The trail for Delta starts at the same trailhead as Surprise/Amphitheater Lake and then veers right 3.1 miles in. We were a little nervous about veering off the trail but we did our research beforehand and we had a friend that hiked the trail before so we knew the trail really did exist. We met up two other groups that were also hiking to Delta and some of them had hiked it before so we all just hiked up and up the mountain together.

After veering off the main trail, it was about 1.5 miles up two rock fields and a dirt steep area before the forest opened up to reveal the lake. Delta has the prettiest, blue/green glacier water we have seen since we went at Glacier National Park 10 years prior. We are not ones to hang out after we get to a summit but we did for this hike. We stayed for an hour taking in the view, having lunch, getting photos, and hanging out in a hammock that someone let us borrow.

This hike was the best hike we did all season and we would highly recommend it. It’s not an easy hike but it’s not horribly hard either, the rock fields are short and there are cairns along the way that mark the trail, it’s not scary, and the lake is incredible! We hiked up to Surprise/Amphitheater Lake since we were just a little over a mile from them after getting back on the main trail, making it about a 13-mile hike.

The second toughest hike we did was Union Falls, located in the backcountry of Yellowstone. We went with friends and after driving down a pitted gravel road we parked a quarter mile from the trailhead because the road was so steep we were afraid the car would get stuck. The 5 of us hiked on and on and on, up and down the hills, through a very very cold steam, always carrying our bear spray (always carry bear spray in bear county!) until we reached the awesome waterfall.

Multiple rivers join together (hence the name) to make this 260-foot waterfall. The three ladies in the group hiked halfway to the falls and one of us did adventure down to the bottom of the falls. The falls was an impressive site and if one has time to hike 16 plus miles go see this waterfall. 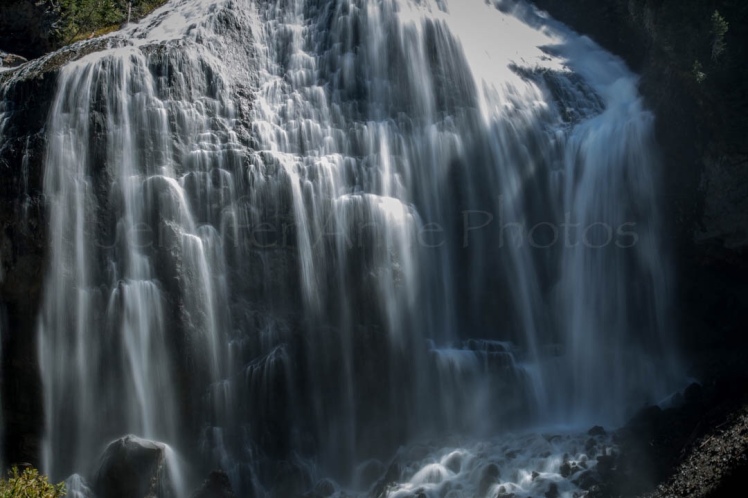 There will be one more blog post about Grand Teton so till then!