It was a nice and sunny day for a drive and we were off to the other Carolina! Since our drives are shorter and we are having longer turn around times in between drives, we put listening to books on tape on hold. We are having a hard time finding shorter books (like 2-4 hours total) so if you have any suggestions ,let me know! While Brad was driving, I checked out the large atlas we keep in the truck. I found a small national park called Congaree and we put that on the list of things to do. That was how our week planning started since we had no plans other than to check out the flea market nearby our campground.
Approaching the campground, we first saw the large flea market (and a roller rink . . . so another activity was put on the list for the week). I had never seen a flea market before and it was busy! I was a little nervous knowing our campground was right next to it, but once we pulled into the campground, I knew it was going to be a good stay. The campground was open, had larger sites, and was set apart from the market.
Once we were set up, we headed over to the flea market. To me, it was like a really big garage sale. All the vendors were set up in an open building. We must have walked for a mile around the market checking out all the stuff—DVD’s, furniture, rugs, video games, toys, shoes, clothes. Just about anything you could think of was for sale.

While walking around the campground one evening, we met a nice couple that had just retired and started living full-time in their RV two months ago. They told us about a tree lighting ceremony in the town of Columbia mid-week and we thought that would be fun to check out. Add roller skating to the list and our week was already full! I love that we can just go with the flow like that.

On Tuesday, we drove to Congaree National Park thinking we would go for a short hike and then head back on Saturday for a longer hike. Our plans were put on hold when we talked to the ranger and found out that all the hiking trails were closed due to the flooding. One side of the park is shaped by the Congaree River which flooded during all the storms. Where we were standing was more than four miles away from the river and the land was still flooded! The interesting fact about this park is that if they didn’t get that flooding, the forest vegetation wouldn’t be what it is—giant and old trees. The trees in this park have been able to survive for years because of the flooding. The tallest tree in the park is a loblolly pine tree that is almost 170 feet tall and fifteen feet in circumference!
Brad and I both agreed that even though we were only able to see a little bit of the park, it was worth seeing it while it was flooded. Not many people get to experience the park at that stage and the flooding is vital for the park to grow. We were able to walk a mile or so on the boardwalk before it was submerged in water. Looking out at the swamp, we could see old water lines on the tree trunks showing how much the water had receded. It will be a few more months before all the water is gone and the hiking trails are open again.

Thursday we hopped in the truck for a quick drive to Columbia for the tree lighting ceremony. The ceremony was in an up and coming area called Vista that has many restaurants, shops, and bars. The main street was closed down, a stage was set up for bands to play on, and many of the restaurants had set up buffets on the sidewalk. One dessert shop even sold s’more ingredients as there was a small campfire to roast the marshmallows. Christmas music was playing, the large tree was lit, and I have to admit, it was a little weird being in such a warm state in the middle of November knowing the holidays are right around the corner. Don’t get me wrong, I’m totally not complaining. I love the sunny, 60-70 degree weather as opposed to snow and freezing temperatures. But when you grow up in the Mid-west, the latter is what you think of for the holidays. Maybe we should get a palm tree to decorate!

We planned on getting in a long hike on Saturday before the Michigan State football game, but we ended up sleeping in. Oops! We managed to get in a five and a half mile hike at Harbison State Park. The trail had very mild elevation gain and in the beginning we saw lots of runners. Toward the middle of the hike, we came across a large river that we had to be cautious in crossing. It was really more Brad who had to be careful because I have waterproof boots. I was able to walk right across with no issues. I feel so powerful when I can do that, lol! We got home and settled in for the game. I forgot to wear my MSU T-shirt, but I am happy to report that the Spartans still won the game. 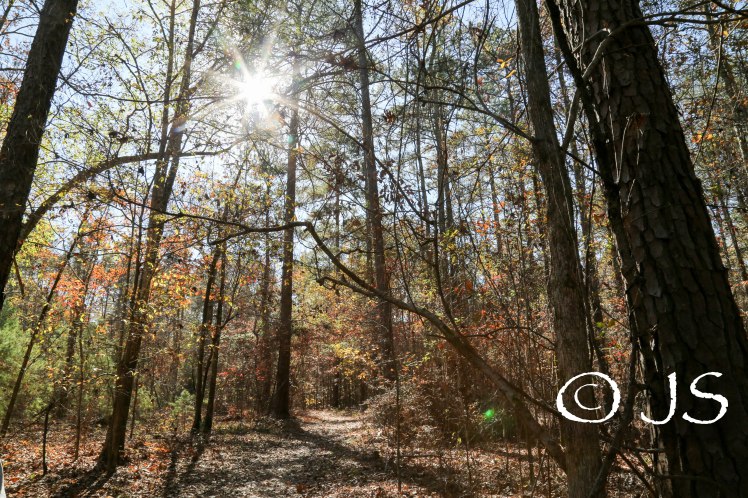 We are off on our shortest drive yet—two hours—right outside Hilton Head. We have lots planned so far—a plantation tour, visiting Savannah, biking around Kiawah Island, checking out the beach at Hilton Head, and exploring an aircraft carrier in Charleston. That will keep us busy for the next couple weeks!
Till then!

6 thoughts on “The Swampy South”