Brad and I were chatting the other day about the dates we still go on. Yes, we still go to the movies, out to dinner, and all the normal type couple stuff, but what we really like to do on a date is something new outside—horseback riding, ziplining, repelling, or go out into the wildness on a hike.
Being outside in the woods and in the mountains is my happy place. (I think Brad would almost agree. He would probably say a sport event first then hiking.)
Living in Washington for three years was amazing. Going on hikes all the time, being outside. We have both missed the mountains since we started on our trek two years ago. We got to be back in the mountains for a little bit when we were on the east coast, but we hadn’t been in the mountains in over a year.

That has now changed. Utah has huge mountains! We are so close to them we can just about touch them anytime we are driving. We certainly have taken advantage of getting outside. One thing we noticed about hikes in Utah is that that they are either easy or hard. There really is no in-between. Maybe it’s because we are at 4,000 feet above sea level. I don’t know. But we have done both type of hikes and all have been rewarding.

Grotto Falls was a very easy and short hike. We went at the end of April so all the snow was melting from the mountains tops and it was starting to get warm. The multiple rivers we hiked through were full and rushing and we were glad to have waterproof boots. The falls were hidden in a cove and you could just walk right up to them. 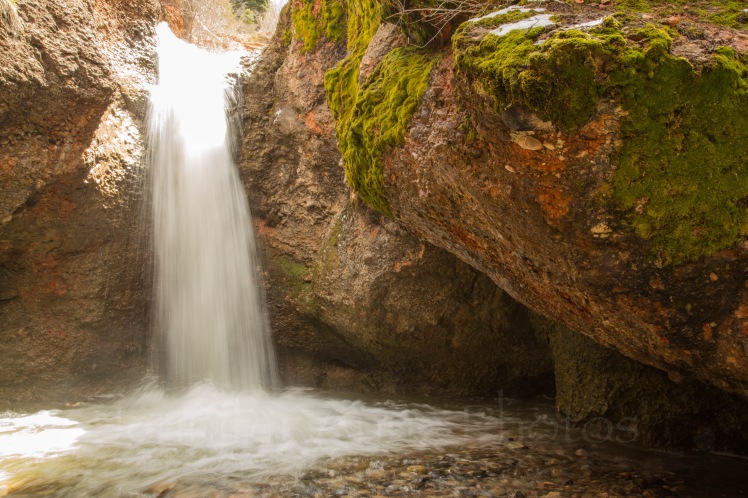 It was chilly in the cove and so quiet and peaceful. A week later, that trail and others in the area were closed due to flooding. We hiked that trail again in June and the rivers were almost dry.

Here’s some advice: don’t do a hard hike the week after giving blood. Horsetail Falls was hard. We were still getting used to the high altitude, it was only our second hard hike, and we had just donated blood. Not a good combo. The minute we stepped out of the truck we could smell the forest. The hike then opened up to a meadow and we could see where some people had camped.

Looking behind us we could see the mountain range. We wound our way around flowing rivers, climbed some boulders, and saw the pretty Horsetail Falls. Not a bad way to spend a Sunday.

Our 12th year wedding anniversary landed on Easter this year. We took the weekend to drive up to a famous hot springs in the area, Homestead Crater. This hot springs in hidden under a 55 foot tall rock and the top part is open and you can actually climb to the top of the rock and peak down into the hot springs (there is a grate at the top so no one can fall in).

Inside the cave, the water is a warm 96 degrees and the water color is a dazzling blue. We got to soak for almost an hour (don’t worry, we wore lifejackets) and watched many scuba divers dive 65 feet to the bottom. This is the only warm diving water in the continental U.S. and is a popular spot for beginner divers (and snorkeling).

After the soak, we headed up to Salt Lake for the night and went to see The Spazmatics, an 80’s cover band. For those of you who do not know, I love dancing to the 80’s and Brad and I first met at an 80’s night. 🙂 We had fun dancing to the music we first met to and enjoyed seeing a new city.
I have lots more to share, but I’m going to stop here. Sorry about all the photos being iPhone pics, but you get the idea of how pretty it is here.
Keep on trekking and till next time!

2 thoughts on “﻿The Land of Many Hikes”